The Vegan Body Project: Governor Pat McCrory, thanks (but no thanks) for this useless lapel pin

The Vegan Body Project: Governor Pat McCrory, thanks (but no thanks) for this useless lapel pin: Create a Link
Posted by Kathryn Stripling Byer at 11:43 AM No comments: 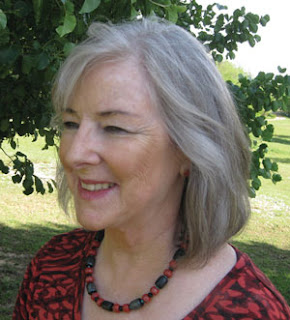 On this Inauguration Day, I celebrate a poet whose poem, First Light, sings forth our first Americans' legacy, the love of this land, this ground upon which we live.  Linda's  lineage is Chickasaw, the tribe who once lived on the land where I grew up.


To those who came before me, and to the grandmothers who watch over us from the holes in the sky through which buffalo came, I give thanks.  And to Linda Hogan. I still remember our drive through the Smoky Mountains to the Pancake House outside Gatlinburg.
If I had a prayer on this day, I would pray for White Buffalo Woman to come back to us, all of us, regardless of tribe,  bearing the sacred pipe, to teach us the ways of peace and healing.  Bison once roamed these mountains where I now live. And once I had a vision of White Buffalo Woman on the trail ahead of me.  Perhaps she was the young woman I saw coming toward me that day in April, dressed "all the way white," as we say here in the Blue Ridge.  That young woman appears my my poem, "Last Light."

In early morning
I forget I'm in this world
with crooked chiefs
who make federal deals.

In the first light
I remember who rewards me for living,
not bosses
but singing birds and blue sky.

I know I can bathe and stretch,
make jewelry and love
the witch and wise woman
living inside, needing to be silenced
and put at rest for work's long day.

In the first light
I offer cornmeal
and tobacco.
I say hello to those who came before me,
and to birds
under the eaves,
and budding plants.

I know the old ones are here
And every morning I remember the song
about how buffalo left through a hole in the sky
and how the grandmothers look out from those holes watching over us
from there and from there.

The tests I need to pass are prescribed by the spirits
of place    who understand travel but not amnesia.

from “This Is My Third and Last Address to You” --Adrienne Rich
1.

Almost the age when memory falters,
I fear being made to count backward
by seven’s, to answer to date, year, and
Presidents, as if  those numbers and names
matter more in the end  than this place
where I stand at the same kitchen window,
observing the same pines set swaying by wind,
reaching upward as I’ll reach, come morning,
my arms to the ceiling, breathing the dark out
of  body and spirit, exhaling that  old dream
of nothingness: laying my head down to sleep.
2.

Now Rocky Face Ridge catches fire
in the last light and, though I can’t hear it
from where I stand, Cullowhee Creek tumbles into
the Tuckaseegee, always unscrolling beneath me
the names I already know.  Snowbird.
Buzzards Roost.  Weyahutta.  Oconaluftee.

I don’t know how long names can last
if there’s no one to care where they live.
What I saw on the hairpin curve down from
the Chimney Tops, white as snow, I’ve not forgotten.
Phacelia.  And how, on the trail leading
up to the summit of Suncota Ridge,
I saw sauntering toward me a young woman
I could have sworn was the reincarnation of
every spring wildflower ever named anywhere.

Closer she comes to me each April,
as if she means more than I have a lifetime
to know.  Roundabout her, her white Easter dress
whispers every thing I want  to keep living
here in this valley that cups the last swallow of light,
every name I must reach to remember or else
lose them, hillside by hillside, to darkness.
Posted by Kathryn Stripling Byer at 1:55 PM 1 comment:

A Sheaf of Christmas Poems 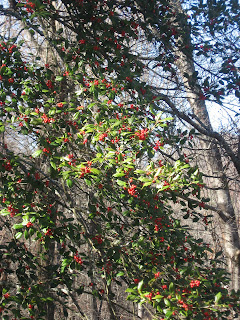 Going through old computer files yesterday, I found these Christmas poems, originally part of the manuscript that became BLACK SHAWL. I saw Mary in these pieces as being here in the NC mountains rather than being a young girl in Nazareth over 2000 years ago. The reader at LSU Press suggested they be dropped, that they functioned better as a small chapbook of poems to be published later. They've waited ever since. As well as I can remember, they were first printed years ago in a journal whose poetry editor was my friend Janice Townley Moore. The Georgia Journal, I believe was its name. Anyway, here they are again, two days before another Christmas. The photos come from sunsets in S. Georgia and holly bushes, as well as waxing and full moons, here in the mountains. 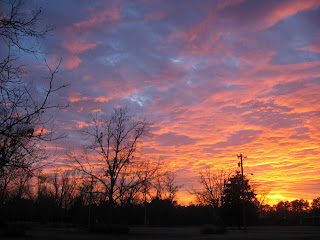 her window before losing
count of the heddle’s
beat. Blue hem

beyond reach, she
dreamed herself
wearing it, skirt flaring

the stars and the moon
as if they were no more than
the first fruits of May,

the wild strawberries
she loved to eat as she carried
them home to her table. 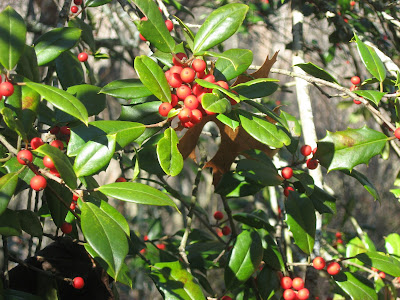 This wind!
She cannot hold her bonnet
against it and lets go
the sashes. A kite of blue
calico sails away over
the fields while a child laughs
and points at the spectacle,
blustery March making light
of her modesty till not a hairpin’s
left clinging, her heavy braids
tumbling like bell-ropes
around her. So here she stands,
skirt swelling forth in its manifold
emptiness, as if she’s come
to the edge of a sea
and hears far out a voice
calling, gull maybe,
though she lives nowhere near
water and she knows her name
is not BEATA. 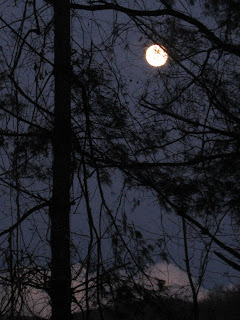 what have we made of you,
when you were happy enough to be nursing
your baby, ignoring the tumult of heaven,
the scuffle of shepherd’s feet.
Wise men on camels meant little to you,
their frankincense, myrrh.
You could take it or leave it.

What good would it do you
whose only concern was the milk you felt
slowly beginning to thicken your breasts?
Or the worry that Joseph had not eaten,
you should have brought along more
of your grandmother’s journey-cake,
more of her dried figs and almonds.

No seafarer's daughter, you grew up
to quail at the stories of drowning men
merchants brought back from the sea ports,
for you were no braver than most women.
You liked to think of yourself as a drop
in the Lord’s deep and, save for a scribe’s
error, you might have stayed "stilla maris"
forever. You had no desire to be star

to whom mariners cried out
for centuries, struggling to grab
hold your sleeve as they’re sinking.

looking out at the straggle
of sheepherders leading their flock
to the hovel where you are still groggy
from childbirth. You wish they would go away,
seek out some other to worship,
for you are too tired to look blessed.
But it is expected of you.
Now and for two thousand years you must
lift up your eyes from your infant
and hear us out, bearing
such words as could almost make you
believe you are beautiful. 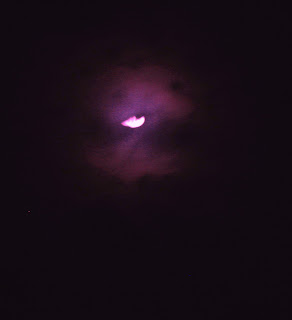 And what of you, Joseph? Still lost in the barn
shadows, stroking your beard
while the curious goats crowd about her,
as if they have already guessed who she is,
not just any poor country girl born

to the tending of livestock. When she calls,
you do not go near.
Is the sight of such bringing forth
more than you fear you can bear?
Not to mention her blood
and the odor of animal everywhere.

All night you stand in the dark stall pretending
your name never crosses
her lips. How much longer before you will go
to her, man enough at last to look
upon God in His baffling dependency?
Posted by Kathryn Stripling Byer at 6:23 AM 2 comments:

HERE, WHERE I AM: A Sheaf of Christmas poems

HERE, WHERE I AM: A Sheaf of Christmas poems
Posted by Kathryn Stripling Byer at 6:16 AM No comments:

"I
Posted by Kathryn Stripling Byer at 10:52 AM No comments:

HERE, WHERE I AM: DOLDRUMS

HERE, WHERE I AM: DOLDRUMS
Posted by Kathryn Stripling Byer at 2:52 PM No comments:

When I was home two weeks ago, I went poking around the attic in our old and now empty farmhouse.  Underneath the attic stairs was a cubby hole, what I'd call a hobbit hole, in which we found several old quilts no doubt sewn by my grandmother Marion Fry Stripling (Bailey).   They'd not seen the light of day in who knows how long, with portions of them frayed, eaten or rotted away.   My grandmother was a N. Georgia mountain woman, so quilting would have been part of her heritage.   I'm wondering what to do with these quilts.  Portions of them are too beautiful to be thrown away.  If anyone can help me find someone to restore these quilts, or parts of them, I'd be grateful.   I'm offering the photographs I made of these too long ignored beauties. 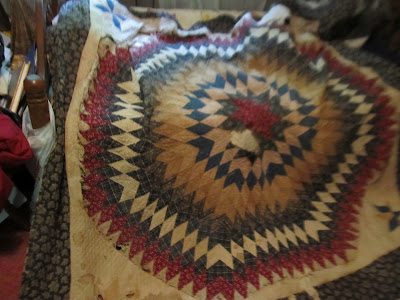 A large hole in the center of this quilt's universe! 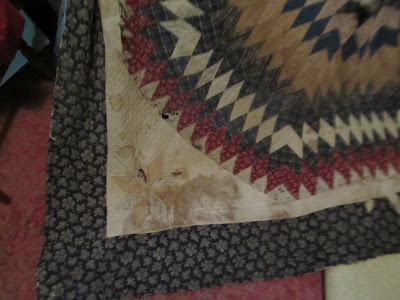 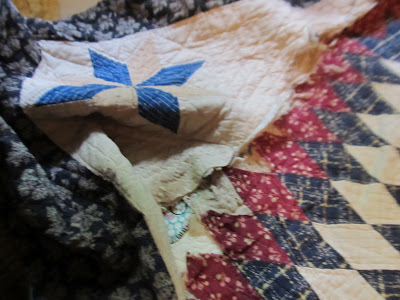 Time consumes even the most beautiful edges of our creations. 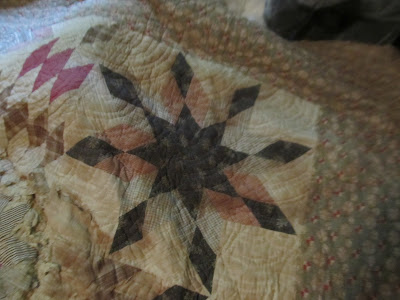 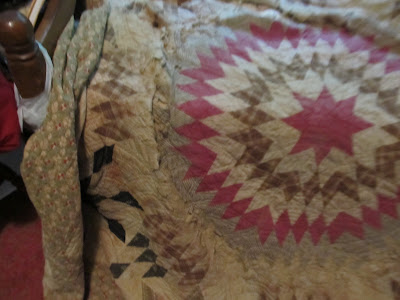 Though more lasting, if we take care of what women's hands have created.
Posted by Kathryn Stripling Byer at 9:33 AM 5 comments:

Kathryn Stripling Byer
I've lived in the Blue Ridge Mountains of North Carolina since 1968, though I'm a native of SW Georgia. My paternal grandmother was born in the Blue Ridge, and I grew up wanting to live here. Where I am. I've published five collections of poetry, the most recent 4 being with LSU Press, and have published poetry in magazines ranging from The Atlantic Monthly to Appalachian Heritage. But I also hike, bang pots and pans around in my kitchen, and love several dogs who leave fur all over my carpets. I write poetry because it's my way of singing back to the world both within and without.

HERE, WHERE I AM

VISIT MY OTHER BLOG, WHERE I TRY TO MAKE POETRY AS EASY TO LOVE AS THE SCENT OF BASIL ON YOUR FINGERS. AS TASTY AS ....WELL, YOU'LL JUST HAVE TO FIND OUT FOR YOURSELF!

LET ME HEAR FROM YOU

Listen to her sing "The Woods Get to Know Me"

INTERVIEW IN THE ASHEVILLE CITIZEN

On the occasion of being named NC Poet Laureate.